Once Upon a Time: The History of Jars for Preserving Food

Home/Uncategorized/Once Upon a Time: The History of Jars for Preserving Food
Previous Next

Once Upon a Time: The History of Jars for Preserving Food

The old saying “necessity is the mother of invention” aptly describes where the somewhat more recent history of preserving food in jars begins.

It all started when General Napoléon Bonaparte needed an effective way to provide nutritious and non-perishable food to feed the French army. To help solve this problem, the French government offered a prize of 12,000 francs in 1795 to anyone who could find a way to preserve food.

With his eye on the prize, Parisian confectioner and chef, Nicolas François Appert began experimenting with the process of storing food in hermetically sealed jars. In 1806, Appert discovered that food could be used for a longer time if packed in glass containers which were hermetically sealed with cork, wire, wax and boiling water. Believing that it was air that caused food spoilage, Appert chose glass for the container because glass is a material least penetrated by air. Nearly 15 years after he first began experimenting, he submitted his invention to the French government and was announced the winner of the 12,000 francs in January of 1810.

While Appert’s method was effective in preventing spoilage, the glass jars had an unfortunate tendency to explode. Reliance on Appert’s method of corking jars fell by the wayside following John L. Mason’s creation of the metal screw-top in 1858. After creating a cap that sealed as it was tightened, Mason realized he needed a container with uniform threads that matched the cap. He designed a glass jar to fit the zinc lid and rubber seal, creating the first hermetically re-sealable glass jar.

In 1884, Ball Corporation licensed Mason’s design and began manufacturing the glass home-canning jars that made the company a household name. Over the years, glass jars moved beyond home canning to preserving food for sale on grocery store shelves. 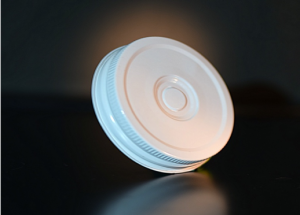 Methods for sealing jars evolved too over the years until the 1940s when jar lid technology became stuck in time.

That all changed when CCT introduced the EEASY Lid – the first jar lid innovation in 75 years. EEASY Lid is a quantum leap from the hard to open jar lids generations of consumers have been wrestling to open. Made of aluminum and available in both lug and continuous thread, EEASY Lid opens with a simple push of a button – a true innovation to the jar industry.