The EEASY Lid: A Year in Review

The EEASY Lid: A Year in Review

This November marks the one-year anniversary of the official launch of our EEASY Lid. We can’t help but take a walk down memory lane to showcase the growth we’ve experienced this past year, along with some major milestones. 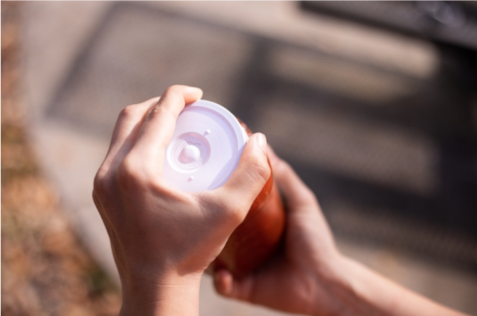 Our launch kicked off in November of 2019, officially introducing our EEASY Lid as the first jar lid innovation in over 75 years. Our main goal from the launch was to educate consumers and the grocery/packaging industry surrounding the significance of the EEASY Lid and the need for inclusive packaging.

News of the EEASY Lid spread throughout key grocery and packaging trades, with publications such as our local Dayton Business Journal, Packaging Technology Today, Packaging Digest and Food Dive covering the launch of the EEASY Lid.

Shortly following our launch, the EEASY Lid officially hit stores for the first time in January 2020 as we partnered with Boyer’s Food Markets – an 18-store supermarket chain in Pennsylvania – and Stello Foods – suppliers of specialty foods for wholesale and retail. We worked closely with Boyer’s and Stello Foods to develop a private label pasta sauce called Darci’s Pasta Sauce. The Darci’s jars used our EEASY Lid to serve as proof of concept for the EEASY Lid and to measure its ability to drive sales. 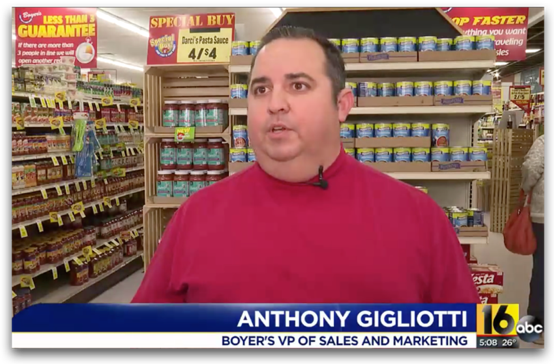 With Boyer’s being the first grocery chain in the country to use the new EEASY Lids, we saw exposure increase as we educated and raised consumer awareness. We were featured in top grocery, packaging and local news publications around our Boyer’s launch, including The Shelby Report, Reading Eagle and the Republican Herald.

In February of this year, we conducted a study by partnering with a third-party validator, North Cliff Consultants, Inc. to assess the difficulty people have in opening traditional vacuum-sealed jars. The study revealed that nearly 50 percent of consumers struggle to open traditional jars – and not just the elderly population. Consumers in the study were ranged 25-74 years old, showing this is a universal problem for people of all ages. Other key findings within the study included: 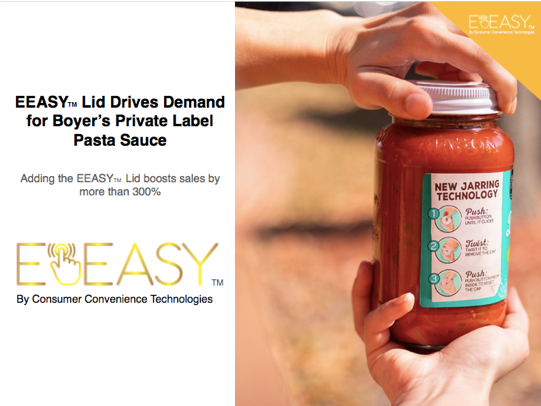 Taking this research, we went out with a press release highlighting our recent findings to packaging and grocery audiences, further fueling awareness of the issues associated with the struggle to open jars. Read more about the study in the piece found in Packaging World.

By May 2020, Boyer’s experienced a shocking 341% increase in sales during our 12-week trial period, causing production to increase drastically. Not only did the Darci’s brand pasta sauce dramatically outperform the Boyer’s private label brand it was tested against, it outperformed almost every other competitor, including several national brands. Because the partnership produced such shocking results, we created a case study to highlight key findings and showcase the increase in sales to other potential companies. News of the success of the partnership quickly spread throughout the industry, with publications such as Packaging Digest covering the study.

By August, new partnerships with Trade Consult and The Affinity Group/Triangle Sales and Marketing were underway in order to help expand our domestic and international reach of the EEASY Lid.

Triangle Sales focused on introducing the EEASY Lid to some of the biggest brands in the packaging and grocery industries in the northeast, while Trade Consult continues to work strategically alongside CCT and scheduling meetings with both national brand and private label companies, coordinating overall execution of the EEASY Lid into the European marketplace. To read more about this strategic partnership, view the entire release in Packaging Today.

This year has been influential in terms of setting our EEASY Lid up for success and making a strong entrance into the industry.

As we have reached the one-year mark, our team is gearing up for our biggest initiative to date, which we are excited to announce next month. This new endeavor will open the EEASY Lid up to a larger market and will be profound within the packaging industry. Heading into the new year, we cannot wait to see the new heights our EEASY Lid will reach. 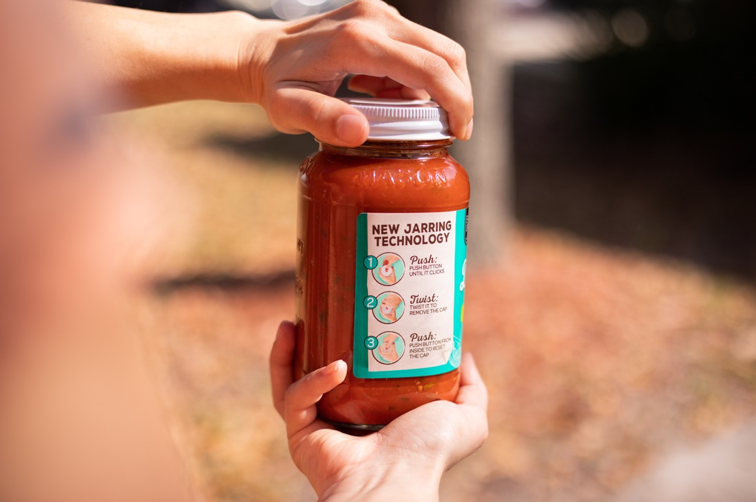