The Jar Lid Finally Catches Up to 75+ Years of Innovation

The Jar Lid Finally Catches Up to 75+ Years of Innovation

The history of the jar lid is not a story of steady progression and innovation. While the 20th century featured significant innovation, the jar lid remained the same for decades until CCT debuted the EEASY Lid in 2019.

One of the first modern era jar lids was invented by tinsmith John L. Mason in 1858. Mason developed a way to cut threads into a metal lid made of zinc. This threaded and gasketed lid served as the closure for a reusable matching threaded glass jar known as the Mason Jar.

Jar lid innovation continued in 1882 when Henry Putnam designed the “lightning jar.” This jar had a glass lid held in place by a metal clamp. A rubber ring was used between the lid and the jar to create a seal on the jar.

The jar lid got another makeover in 1903 when Alexander Kerr introduced a jar closure made up of two-piece metal lids that sealed on the rim.

The next innovation in jar lid technology occurred in 1950s when the White Cap Company developed the “Twist-Off®” Vapor Vacuum lug closure. This was an improvement from the company’s earlier closures that required a tool – the Lid Flipper – to remove lids.

That’s when jar lid innovation came to a screeching halt.

While innovation left the jar lid behind after the 1950s, the decades that followed introduced some amazing scientific and technological breakthroughs.

For example, the 1960s saw the first moon landing and the invention of the cardiac pacemaker and the portable calculator. The pace of innovation showed no signs of slowing down in the 1970s with the introduction of cellular phones, the inkjet printer, car airbags and the MRI scanner. The 1980s gave us the Space Shuttle, the Macintosh computer, DNA fingerprinting, disposable contact lenses, and the Internet. The 1990s saw the debut of text messages, the iPhone and the launches of both Facebook and YouTube. The 2010s delivered more technological innovations including the iPad, LED light bulbs and home virtual assistants.

It is surprising that the massive amount of innovation over the last 75+ years did not include much needed improvements to the jar lid. This ubiquitous packaging item, found in homes across the globe, remained unchanged until 2019 when CCT introduced the EEASY Lid – the first significant innovation in the metal jar lid industry since the 1950s. 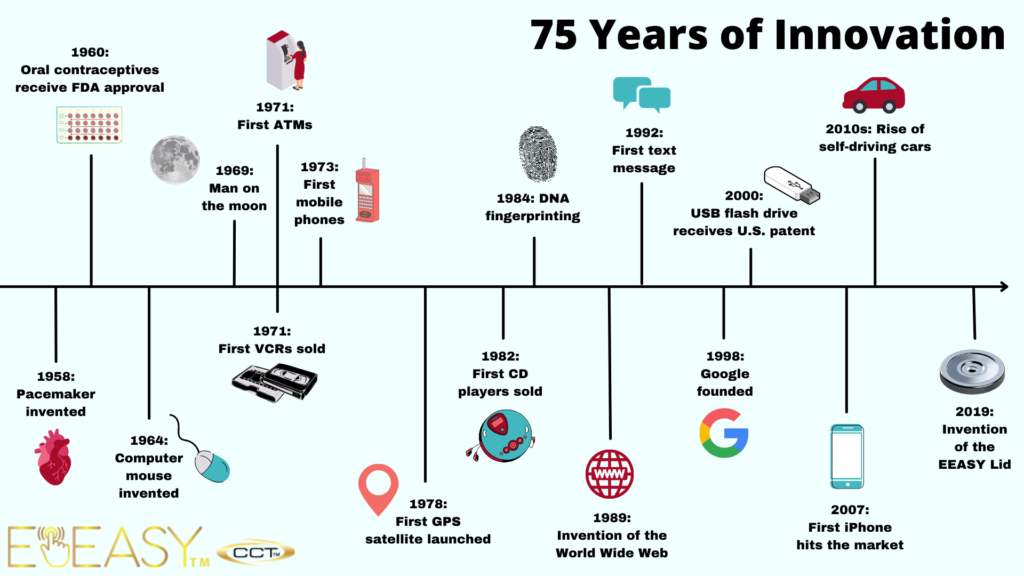 In developing the EEASY Lid, CCT disrupted the jarred packaging status quo by focusing on designing a more accessible, inclusive, sustainable and consumer-friendly jar lid. Since the launch of the EEASY Lid in 2019, we have continued to innovate. We introduced the world’s first aluminum lug lid in 2021 and that same year made the EEASY Lid available in both lug and continuous thread (CT) versions (both made of aluminum). In 2022, we expanded our capabilities to include manufacturing line assessments designed to help companies accommodate the EEASY Lid in their production lines.

The last three years have been a flurry of innovation at CCT, and we are not done yet. Watch this space for more packaging innovation!