Following the launch of our aluminum lug EEASY Lid back in March, we are excited to release the results of North Cliff Consultants, Inc.’s – an independent contract testing services for manufacturers and retailers – consumer study that looked at the difficulty of opening traditional jar lids compared to the EEASY Lid.

Last year, North Cliff performed a similar study for the CT version of the EEASY Lid, which returned excellent results. While we expected the EEASY Lid to have an impact on how easily participants were able to open a jar, we were thrilled with the outstanding results that showed the EEASY Lid stood up to the test. The study revealed that nearly 50 percent of consumers struggle to open traditional jars – and not just the elderly population, as participants ranged in age from 25-74.

We wanted a comparable study for the aluminum lug EEASY Lid, so we once again surveyed males and females ranging in age from 25-74. Approximately 80 people participated in the survey, answering questions to determine the level of difficulty they experience opening traditional jars compared to the EEASY Lid.

The results revealed that not only did consumers find the EEASY Lid easier and more convenient than a regular jar lid, but it also changed their perception of jar lids overall; 86% of consumers said they viewed the EEASY Lid as a premium product, and 87% say it improved the way they look at opening jars.

The result of the consumer study on the aluminum lug EEASY Lid is further validation of our goal that we originally set out to accomplish – make it easier to open stubborn jar lids, bringing more inclusivity to the food industry.

The consumer study was recently covered by Food Navigator – a top publication covering the food and beverage industry. You can read the full article here.

Additionally, The Canmaker – a leading business magazine for the global metal packaging industry – recently shared the news as well. You can read the full article here. 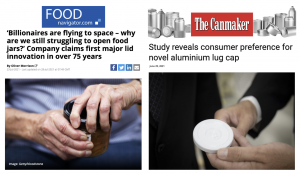